Blogger wwayne got me thinking about my favorites;  Favorite story arcs and favorite single issues.  Putting the definitions as simply as possible ( since us geeks love to argue about the definitions ) we get….

Story arc:  a  story occurring within an ongoing series.  OK, that is not going to work for me, dammit!  Since I am a trade waiter and have been for 2 decades, some of this will have to be at least a little in the self-contained series vein.  But I will try to justify and explain as I go.

Single issue:  Just like it says on the tin, a single issue of an ongoing series.

So, in no particular order except the order if find them on the shelf….

Concrete:  Strange Armor.  (1997)  This is where the definition gave me trouble as Concrete creator Paul Chadwick didn’t really DO an ongoing Concrete series, just connected limited series, the definition became an issue.  Also in the age of trades and collections the actual issues of a particular arc are harder to recall.  This one I did read as the single issues when they came out in late 97 and early 98.  A 5-issue limited in the continuing story of Ron Lithgow, this was the story that finally gave the full and definitive origin of the character, and fleshed out the back story greatly.  The “series” of concrete stories that Chadwick has done are an amazing character study with its roots in the sci-fi and super hero stories he grew up with and have more heart than any other book(s) I have read since.  All but the most recent DHP series have been collected as trades and are still powerful today.

Cerebus #139 to 150 (Melmoth). (1990) The was the story that followed Jaka’s Story and is one of the shorter Cerebus arcs.  A beautifully written and drawn book, it explores the final days of Oscar Wilde as seen in this fictionalized universe.  Taken directly from contemporary accounts of friends of the dying writer, this is a powerful and sad story.  It is available in “phone book” number 6 of the Cerebus run.

Action Comics  #866 to 870. (2008) Geoff Johns and Gary Frank update and redefine the Brainiac character.  One of the most successful updates DC has ever done.  Gary frank’s art is at its very best here.  Available as the Superman Brainiac trade.

Justice League of America#1 to 7  (2006)  Brad Meltzer is a polarizing figure in comics thanks in large part to the love it or hate it Identity Crisis series.  (loved it)  This arc started up the new volume of JL with artist Ed Benes, and is a story that actually made me interested in JL.  What got me into the story in the first place was my affection for Red Tornado, and this story focuses on him and his existence heavily and is a great team book to boot.  Available as The Tornado’s Path trade collection.

Planetary #7 to 12 (2000)  After setting up the world of Elijah Snow and his team in the first arc, Warren Ellis and John Cassaday outdid themselves on this arc (available as Planetary:  The Fourth Man collection).  The jumped into the homages of the comics with both feet here.  They did versions of Transmepolitan, Hellblazer, Doc Savage and touched on the origins of the big three at DC and still managed to keep the main story moving forward without the meanderings that affected some of the later issues.

My Jill Thompson sketch in my Absolute edition

Sandman #41 to 49 (1992)  This was the arc that really made the series sing for me.  After the A Game of You arc cooled me on the series (It took me years to learn to appreciate it) this series just sang with life.  Gaiman was really flying here and this is the run that made me love Jill Thompson’s art.  This is available in the Brief Lives collection or in Absolute Sandman vol 3.

Fantastic Four #242 to 244 (1982)  I still go back and read these every few months.  In fact the whole #240 to 250 part of John Byrne’s run is just crazy fun to read!  This was the first Galactus story I read that I actually liked.  Available in several reprint volumes from FF Visionaries vol 2 to the big-ass omnibus collection of the Byrne run.

Uncanny X-Men #165 to 168 (1982)  Paul Smith’s first issues on this title were the wrap up to Chris Claremont’s Brood story.  ( I include 168 here as the epilogue to that story–because I CAN!) To this day, his art in these issues is amazing to look at.  Collected in too many versions to count.

Mage #1 to 15 (1984)  Technically this was a limited series, but to my mind, when you know that you are just going to do a series of limited series, it is just a series with breaks.  In the case of Mage the break between the first and second series was a little more than just a break.  The same is true with the ongoing wait for the third series.  This story by Matt Wagner was lightning in a bottle. 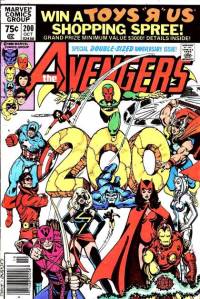 Avengers #198 to 200 (1980)  This was David Michelinie and George Perez’s last regular issues on the title(in a run anyway) and they rent out with a great story that was a follow-up to the Claremont/Golden story in Avengers Annual #10.  This run is not yet collected.  Hopefully the Marvel Masterworks will continue long enough to get to these.

Well, I stuck to 10.  I omitted runs where there was a single good issue that MADE that run, and I avoided genuine limited series.  Maybe that will be another list.  Next up…